The Culturepreneurs 20/21 program has started

Home > The Culturepreneurs 20/21 program has started

The Culturepreneurs 20/21 program has started 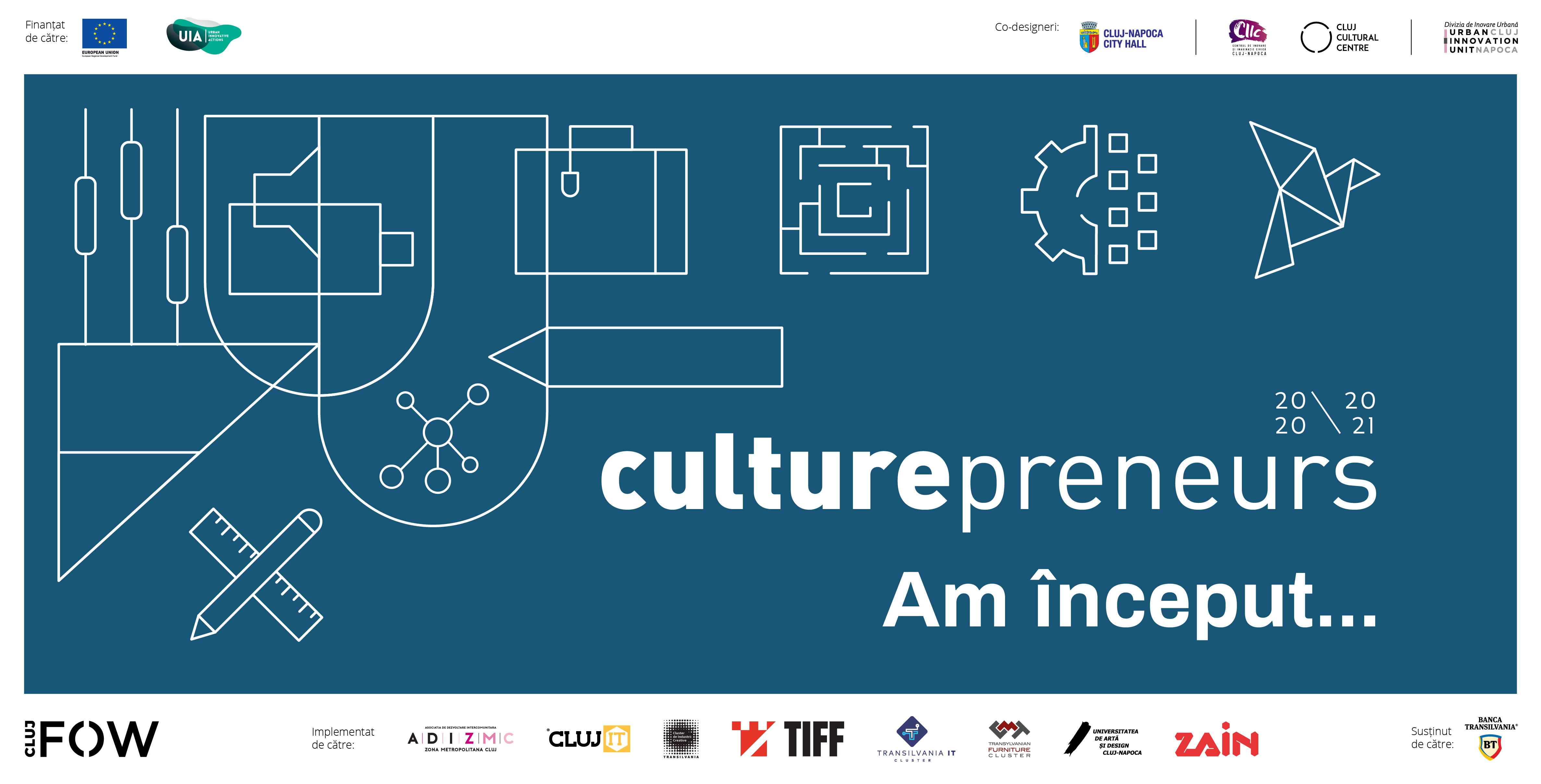 Culturepreneurs 20/21, an incubation program for the cultural and creative industries, officially started on September 21st. The start was marked by an online meeting attended by the 69 creatives selected after the public call organized in June, together with professionals from Art and Design University of Cluj-Napoca, Cluj IT Cluster, Transylvania Creative Industries Cluster, Transylvanian Furniture Cluster, Transilvania International Film Festival, Transylvania IT Cluster and ZAIN Transylvanian Creativity Festival.

The meeting started with the presentation of the program context, made by the members of the management team, Ștefan Teișanu, Anamaria Vrabie and Andreea Bercan and by the representatives of the partner institutions: Mara Rațiu – vice-rector of Arts and Design University, Andrei Kelemen – executive director of Cluj IT, Cristian Hordilă – manager of TIFF, Ciprian Morcan – executive director of the Transylvanian Furniture Cluster, Georgiana Ciceo – ZAIN, Alexandru Roja – Transilvania IT Cluster and Mircea Vădan – project consultant.

In addition to the information on how the seminars will be organized, the participants also received information that could be useful in working with their trainers, from the importance of a healthy and fresh perspective in the work process, to working together as a team. And that “together” is, after all, the key to the Culturepreneurs project because, indeed, an important aspect of the program is that it wants to encourage meetings between people and the environment, for creative purposes.

This first online meeting of Culturepreneurs 20/21 ended with an activity program designed to help participants get to know each other better, despite the physical distances. The pandemic context and all its consequences have turned the online environment into a tool that helps us connect and – even if the first stage of Culturepreneurs will take place online – it will be a good opportunity for participants and their mentors to know each other, to collaborate and adapt to various innovative participation methods.

The first stage of the program, which includes a series of seminars developed by professionals in the film industry, design, ITC, entrepreneurship, cultural policy and social innovation, will run until December 14. During the second stage of the program (January 11 – March 19, 2021), participants can put their ideas into practice in specialized labs within the Regional Center of Excellence for  Creative Industries (CREIC).

Culturepreneurs is an entrepreneurship education program developed by Cluj Cultural Centre, dedicated to professionals in the cultural and creative sectors and supported ever since its launch by Banca Transilvania. Now, in its third edition, the Culturepreneurs program is developed as part of the component focusing on the work in the cultural and creative sectors within Cluj Future of Work, the first project in Eastern Europe funded by Urban Innovative Actions.

Cluj Future of Work is a project initiated by the Urban Innovation Unit in Cluj-Napoca, which was created by the Cluj Cultural Centre in partnership with the Centre for Innovation and Civic Imagination of the Municipality of Cluj-Napoca.